The Church of San Vito 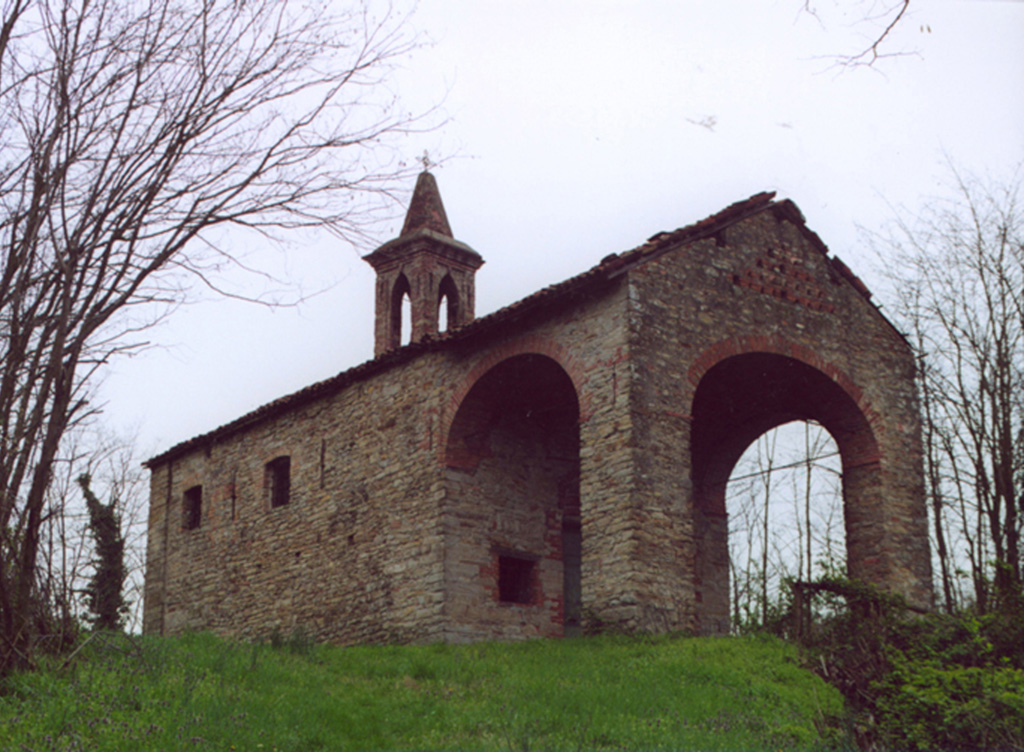 
A massive earthquake in 2000 hit Alessandria area and in 2002 the Church of San Vito in Morsasco, was consolidated and seismically reinforced with composite materials. The project, aimed at making accessible and statically secure the building, has been entrusted to the Technical Studio ARC of Acqui Terme.

Brief history of the Church of San Vito

The Romanesque Church of San Vito, dating back to the early medieval period, is a small building with a single nave plan, a porch and vaulted semicircular apse on which there are frescoes dating from the fifteenth century.

Its exact date is uncertain, however, according to the Studio ARC, the building site and the masonry texture of the walls, the church over the centuries has suffered more than a transformation. The original idea was in fact made of a small structure made with concrete rectangular sandstone while the extension of the side walls was made before 1585. At the beginning of the eighteenth century was later built the porch, with a ribbed vault in bricks arranged in a sheet, fifty years later the bell tower and the roof of the classroom were built.

The small church was left over time in a state of neglect and decay, as to be classified by the competent authorities, after the 2000 earthquake, as occasional use building, non-habitable and in poor state of maintenance. An immediate intervention of consolidation and securing were necessary. 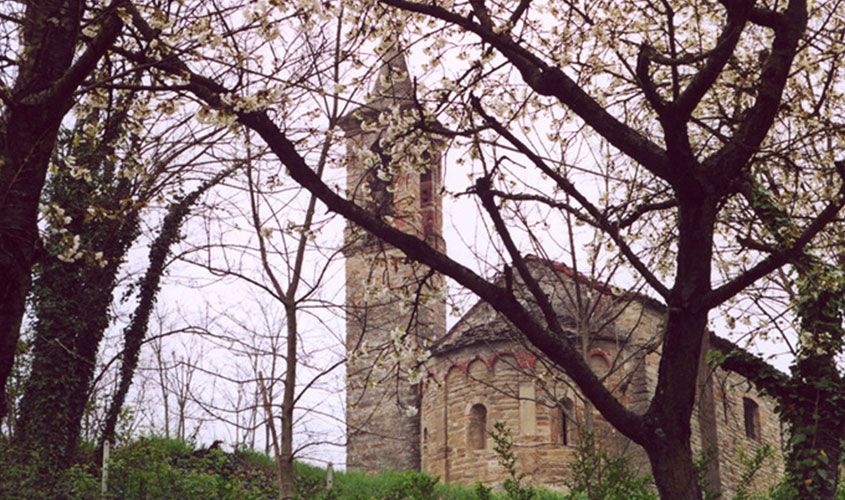 Investigation and intervention of consolidation

After the seismic event the church was subjected to diagnostic tests by the research team, made at the time by young architects such as the Arch. Antonella Barbara Caldini and Arch. Finocchiaro from the Studio A.R.C. Through scientific instrumentation made available by the departments of the Faculty of Architecture, Engineering and Industrial Chemistry, University of Genoa, dynamic tests were carried out on the tie rods, sonic tests on masonry, endoscopic examinations and relative humidity monitoring.

Surveys have found, among other damages, cracks along the meridians of the apse and the hemicycle of the apse wall. The next project of consolidation and seismic improvement then allowed to intervene in the affected apse by means of:

St. Vito Church in Morsasco, application scheme of the extrados of carbon fibers in the apse

The consolidation of the apse

Remove the old roof and clean the ceiling, plaster the intrados cracks and then shoring the structures. It was subsequently carried out the cleaning of the extrados with the total elimination of inconsistent parts and any other materials that could affect the good adhesion of the above mentioned processes.

Once removed the dust from the entire surface, the consolidating bicomponent synthetic resin Kimicover FIX was laied. After that, the two-component thixotropic epoxy adhesive Kimitech EP-TX was laid using a spatula, to level the surface to be reinforced and create an adhesive layer to immediately lay the the reinforcement.

The reinforcement of the apse was executed by the application of carbon fiber reinforcement bands Kimitech CB 320, put forth a roller and then impregnated with fresh two-component epoxy resin Kimitech EP-IN, applied by brush. This process was performed by arranging the carbon fiber strips and overlapping them in a double layer, to follow the curved profile of the vault. Two more reinforcing bands orthogonally to the previous one were added, as a transverse reinforcement or stirrup. 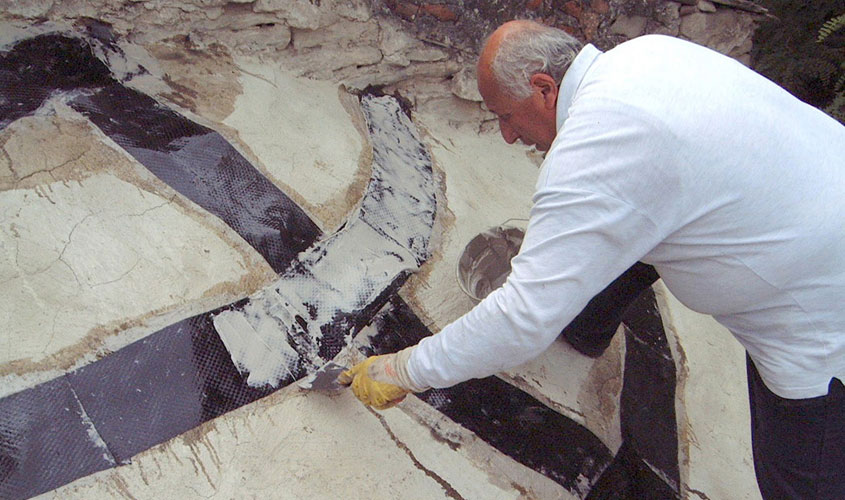 The intervention described by the designer

The task of drawing up the consolidation project of San Vito Parish was unexpectedly given to the undersigned. Fresh degree and qualification, I was specializing in restoration of monuments and I had chosen this building as a topic of graduate theses.

Even before the earthquake of August 2000, officials of the competent superintendents signaled the precarious state of preservation of the fifteenth-century wall paintings, placed inside the hemicycle apse and the whole apse tiled with uncommon slabs of stone.

At the post-earthquake inspection technicians of Regione Piemonte highlighted a slight "apse overturning" and suggested an intervention of  "apse encircling", stating that "it was not possible to inspect the condition of the roof structure and the the bell" and moreover "had been detected disruptions own to the location of the factory, on the edge of scarps "with possibile failure of foundation ground and consequances on the same foundations, especially in the right corner of the church porch."

Given this finding I decided not to proceed with an invasive procedure such as the apse hoops. This fact would have resulted in operational difficulties due to the presence of the 1400's fresco inside and valuable external walls. So I chose a different solution. In case of a new seismic event, it would not be the apse hemicycle but the rest of the structure to suffer the most serious damage.
it was first planned the filling of existing lesions with mixtures binders injections in order to give continuity to the damaged masonry elements. So, given the dilapidated state of degradation of the cover, he opted for its restoration, respecting the material and original technique. The actual consolidation intervention was put into pratice with a system of bands of carbon fibers on the extrados, that compared to other frequently used methods of consolidation guaranteed undoubted advantages. The system in fact guaranteed reversibility, since they can be removed without any particular problems, low invasiveness (the strips are applied without requiring demolition or notches) and effectiveness. In fact, the mechanical properties of these fibers, offer significantly consolidating action.

The Church of San Vito today

"Today an intervention of this kind would not look so innovative but remember that the intervention was designed and built in 2002 when there were still many doubts about the effectiveness and performance of composite materials.

Almost fifteen years later, the small building has not experienced problems or damage in the apse but we must also point out that this piece of land has no longer been subject to severe earthquake swarms. At least, not at the level of those that hit central Italy last August.

Landslides still exist due to the building's location near the scarps, I have informed several times our client and the municipality about this fact. This lead to a specific project of "securing of the southern scarp, the bell tower and discontinuity of the walls " that I draw up in 2014 and which unfortunately has never been put into pratice due to lack of funds.

It would be appropriate, therefore, to focus on the Church of San Vito, with specific reference to the southern facade affected for years by a severe crack and several wall discontinuity. Unfortunately, the lack of available budget funds is a sign of the current problems of our country in the preservation of cultural heritage. A warning signal that may lead to the loss of significant artistic and architectural value properties and the so-called minor artifacts, which are the symbol of the local historic heritage" 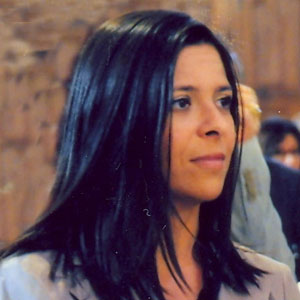 Antonella Barbara Caldini, architect, born in 1972, lives and works in Acqui Terme, in the province of Alexandria. Owner of A.R.C. Studio, has specialized in the restoration of monuments and deals with the design and restoration of historic protected buildings.
Sito web: www.restauroeconservazione.info