The famous Michelangelo's sculpture, dating back to the XVI century, from May 2nd 2015, at the opening of EXPO 2015, is back again visible to visitors from around the world inside a new location of the Palazzo Sforzesco in Milan. Infact, after 60 years spent in the Hall of the Scarlioni, it has been housed in one of the lovely rooms recently recovered from the ancient Spanish Hospital and placed, for the occasion, on an advanced basement able to make it immune from both eventual seismic actions and frequent vibrations generated by the visitors and by the passage of the underground trains nearby.

By considering the priceless artistic value of the statue, the exceptional work of relocation of the sculpture represented an extremely delicate moment and also an opportunity for many companies to field their skills and technologies. Among these, Kimia was called to carry out the locking system to the basement of the sculpture. The result was the creation and application of the reinforcement Kimitech FRP-LOCK® PR.

The idea of realizing a locking system with composites is born from the thirty-years-experience of Kimia in the field of structural reinforcements with these materials. The steps prior to the placement of the reinforcement, have been in-depth studied to develop and test - in the laboratory - the best solution taking into account duties such as, for example, the necessity to make the intervention be reversible and the work force of the about 800 kg weight of the sculpture.

Kimitech FRP-LOCK® PR is realized through a lamination process of the carbon fiber fabrics around a metallic core and it looks like a disk made of composite material in which the base forms the bonding surface. At the center there's a metal screw on where has been screwed the metal cylinder then incorporated into the block. 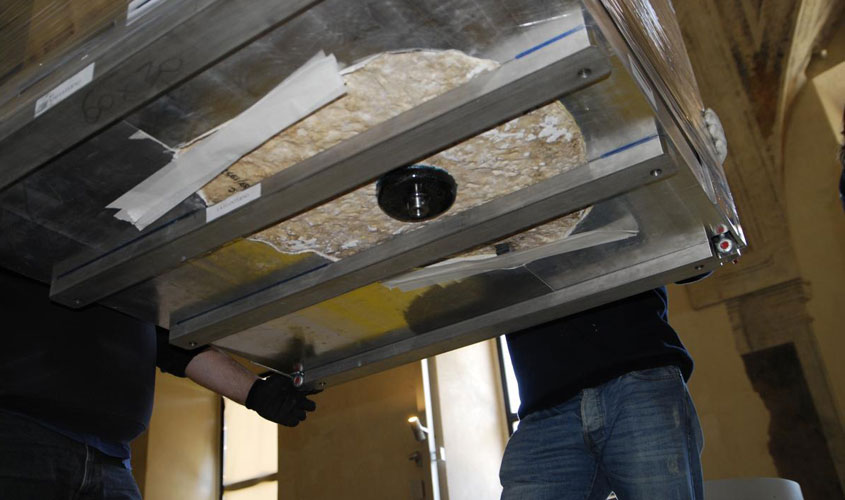 The new circular reinforcement designed for the Rondanini Pietà belongs to the "ancestor" Kimitech FRP-LOCK® family, an anchoring device for carbon fabrics based on the coexistence of composite and metal components, engineered to prevent the delamination of the reinforcement fibers. Being made of carbon embedded in an epoxy matrix, it ensures good characteristics of compatibility with the system bonding resins to the support. Moreover, the specific arrangement and the stratification of the carbon fabrics used, give to the reinforcement homogeneity and resistance characteristics, confirmed by experimental tests carried out.

The phases of the intervention 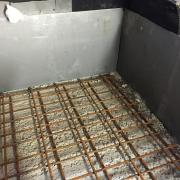 The sculpture cylindrical basement support, with its special anti-seismic and anti-vibrating platform realized by a team of companies, including the Japanese Miyamoto International studio, the THK multinational mechanics and the Italians Goppion and Reglass, has been positioned inside the room of the Spanish Hospital. The surface was achieved by running a jet of the pourable fiber-reinforced cement mortar Betonfix CR, reinforced with welded steel mesh.

After the protective housing of the anti-seismic and anti-vibration basement, the Statue, properly protected and secured, was finally brought into the Spanish hospital room. In order to proceed with the bonding of the Kimitech FRP LOCK® PR on the lower surface, the statue was raised and maintained in safety for all the necessary processing time.

Finally, once screwed the metal cylinder to FRP-LOCK, occurred the final positioning by inserting the cylinder into the protective housing, in the basement.